The Monastseries are linked by asphalt roads, but the area is best explored on foot on the old paths (where they still exist). You could walk around all the monasteries in one day, but you would need an early start and plan, at least a two hour break from 1pm to 3pm when most monasteries are closed. They are only open at the same times and closure days do vary from season to season. Walking and climbing
more
LeftRight 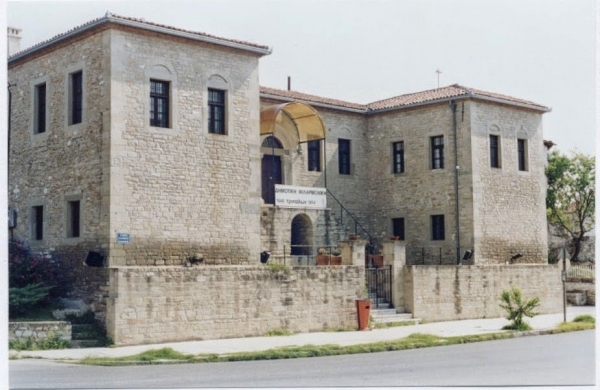 In a small distance from the rock of the Great Meteoron Monastery there is the smaller, yet very imposing rock of the Monastery of Varlaam. According to the tradition the first inhabitant went there 600 years ago in the 14th century. he was contemporary of Saint Athanasios, the ascete-anchorite varlaam who also gave his name to the monastsery.The present magnificent katholikon that is honoured in memory
more

The Monastery of St. Nicholaos Anapafsas is situated very near Kastraki Village. It is the first monastery one can meet in the way from Village to Meteora. All around we can see the ruins of other monasteries of Prodromos, Aghia Moni and Pantokrator and the small church of Virgin Mary of Doupiani.The rock, where that monastery stands, is very small and narrow at the top. This reason influenced the
more

The Monastery of St. Sthephen is situated on the southeast end of the complex of the Meteora rocks, right above the town of Kalambaka and it is the only monastery that one can visit without using stairs because the approach can done by a small bridge.The view from the balcony of the monastery is magnificent. Down in the valley lies Kalambaka and further away the Peneios river.Since 1961 this monastery
more
LeftRight

Close to Kalampaka, in the way to Meteora is found the graphic village named Kastraki, with the characteristic traditional life and its rich natural beauty. Its beauty is noticed, particularly, by the imposing landscape of rocks of monastic state of Meteora. The village is embedded in the embrace of huge rocks, ressembling that they protect it. The community was created the time of Ottoman domination
more

Diava is a semi-mountainous village (300m. height), 3,5 km south-west of Kalampaka. It is constituted by roughly 900 residents, which deal in their majority with agriculture and livestock-farming.In the East of the village, the River Penios flows. Exceptional beauty the forests ?Channels? in the 1200 m., in distance of 8 km from Diava are distinguished Meteores and Domokos. The old name of village
more

Talking about Pertouli, which is surrounded by the famous mountains Neraida, Koziakas, Loupata and Avgo, and full of dense forests, lush meadows, wild flowers with colorful spark next to the tall trees and flowing waters of the river filled with aquatic plants, will not be an exaggeration to speak of a mountain paradise.The Church of Holy Apostles is a white miniature in the green landscape,
more

Elati, a village attracting tourists all through the year, is the first village we meet on the road, 14 km from the Pyli at an altitude of 860m. The population of 700 in the winter rises to 4,000 in the summer, with the main income coming from tourism and secondarily from logging and stock-raising.The rare beauty and the hospitable spirit of Elati combine to make it one of the most developed holiday
more

Neraidochori is located 1,140m above the sea level, only 4 Km away from Pertouli and is just a short distance away from the beautiful grasslands which give their place to steep tops. The village is surrounded by the mountain tops Marosa (1,980m) from where one has a magnificent view of Mesochora villages, Megdovas Lake in Karditsa, and the plains of Thessaly, Neraida (2,000m) with a unique view,
more
LeftRight

Graduate Guide, complete with scientific training and expertise in the monasteries of Meteora responsible for:

Kalafati Domniki is a qualified tour guide based in Kalambaka, respecting the culture and especially the religious tradition of our country, welcomes you and believes will provide you memorable visits to the monasteries of Meteora and the sights of historic and archaeological sites of northern Greece!

Languages:
The tour besides the Greek and English language, is given in almost all languages in combination with translator. You can select any language you want to have the tour

In as small distance from the rock of the Great Meteoron Monastery there is the smaller, yet very imposing rock of the Monaqstery of Varlaam. According to the tradition the first inhabitant went there 600 years ago in the 14th century. He was contemporary of the Saint Athanasios, the ascete-anchorite Varlaam who alsogave his name to the monastery.

The present magnificent Katholikon that is honoured in memory of All Saints was erected in 1541/42 by the two brothers priest-monks from Ioannina Theophanis and Nektarios Apsaras, as it is written in the inscriptions and the archive. Actually, it sseems that the main construction of the Katholikon had finished in 1541/42, while the rest of the works in the church and the narthex continued until May 1544, as we conclude from the momerandum of the priest-monk Cassianos ex-Abbot of the Simonos-Petra Monastery, which is reffered to the death of Priest-monk Theophanis. According to the text Theophanis died on 17th May 1544 on Saturday, just beefore the Sunday of the Blind man.

During his last moments summoning up all his energy, he went out of his cell with a lot of difficulty supporting himself to his stick and eagerly went to the newly constructed church. Fascinated by its beauty and glamour, he glorified God and All Saints to whom he had devoted the church. Then he blessed all the monks who had worked very hard to the monastery as quarrymen, builders, woodcarriers, for the completion and the illustration of the church and finally deeply satisfied and stirred, he returned to his cell where he died in piece consigning his soul to his Creator: "In the year 1544 during the month of May the 17 on Saturday at the ninth hour the most venerable abd beautiful church and the narthex finished on the holy rock of Varlaam with the efforts and at the expenses of the Most Saintly and Reverend Fathers Nektarios and Theophanis, who were physical brothers.

At the time, the blessed Theophanis had become ill for ten months and he was so exhausted by the serious illness that he almost died. But so eagerly did he want to see the church, that he left his bed willfully and joyfully, despite he was ill and being supported by his stick he went into the church where he saw its completion. Then he raised his hands glorifying God and All Saints (to whom he had dedicated the church) and he blessed and prayed for the whole brotherhood the builders, quarrymen, woodcarriers. After that he went back to his cell making the sign of the cross, he lay down looking at the East... (cod. 180 and 275 Mon. of Varlaam).

The katholikon of the Monastery has typical, elegant, Athonite style and its main church is two columned, cruciform, iscribed with the two typical conches of Mount Athos (the choirs). The nave is preceded by an ample esonarthex (lite) with a nice dome in its center, equivalent to the one of the nave, supported by four columns. The nave, as inscription on the south wall declares, was decorated in 1548. The name of the painter is not mentioned, yet the style, the colour, the movements, the arrangement of the figures and the scenes and generally the manner of these wall-paintings that look alike with those of the chapel of St Nicholaos in the Monastery of Megisti Lavra (in Mount Athos), which was painted (according to the inscription) in 1560 by the Theban painter Fragkos Katelanos, lead us to attribute the illustration of the nave of Varlaam Monastery to the same famous artist. On the dome, there is the representation of Pantokrator (The All-Mighty) as the Fair Judje, in the tympanum there is the honorary chorus of the prophets and angels, on the pendentives the four Evangelists, of whom Luke is depicted to paint an icon of Virgin Mary.

On the two lateral conches of the nave, the choirs, there are fully-bodied military saints, while on the upper surfaces of the walls there are many figured compositions inspired by the life and passion of our Lord and the church calendar in general. On the west wall above the entrance is established representation of Assymption the center of which is predominated by her lifeless body on the death bed, while Lord is holding gently her pure soul flanked by angels, apostels and hierarchs. Remarkable is the performance of single figures of saints such as of the two melodists of our church, Ioannis Damaskinos and Kosmas Maioumas. On the east columns on the sides of the iconostasis are depicted full-bodied Virgin Mary on the right and Jesus Christ on the left with richly decorated aureoles over their heads reminiscent of the portable icons which happens to the icons of other single figures of saints and archangels (St. John the Baptist, Archagel Michael, etc). There is a great opportunity to visit this Monastery and see more by yourself. It would be a fantastic and unforgetable experience !!!

The Monastery of St. Stephen is situated on the southest eend of the complex of the Meteor rocks, right above the town of Kalambaka and it is the only monastery that one can visit without using stairs because the approach can be done by a small bridge. The view from the balcony of the monastery is magnificent. Down in the valley lies Kalabaka City and further away the Peneios River. Since 1961 this monastery is nunnery with a large and active sisterhood, who along with the rich spiritual and charitable work, can show a remarkable renovating and building activity in the monastery. An old tradition connects this monastery with female monasticism.

The swede traveller Jonas Bjornstahl, who visited St. Sthephen on 3 April 1779, notes certain things for the monastery which he probably had heard by monks and nearby residents: " At the begining this monastery was for women who loved quitetism but later became abandoned intil re-inhabited by monks".

The history of the early years of the monastery is lost in the past, covered by the mist of legends and traditions as it happens with the history of most monasteries. Two are for sure the founders of the monastery: first the Archimandrite saintly Antonios around the first half of the 15th century, whom a later tradition connected with glorious Byzantine family of Katakouzinos and second the priest-monk Saint Filotheos from Sthlataina or Aklataina (today Rizoma village in the region of Trikala City) around the middle of the 16th century. We do not have the exact day of the construction of the original church of St. Stephen, which was replaced by the present church in the middle of the 16th century by the priest-monk Filotheos. It probably happened in the 14th/15th century as it happened with the churches of nearly all the other Meteora Monasteries.

THE MONASTERY OF SAINT NICHOLAOS ANAPAFSAS

The Monastery of St. Nicholaos Anapafsas is situated very near Kastraki Village. It is the first monastery one can meet in the way from Village to Meteora. All around we can see the ruins of other monasteries of Prodromos, Aghia Moni and Pantokrator and the small church of Virgin Mary of Doupiani.

The rock, where that monastery stands, is very small and narrow at the top. This reason influenced the whole structural formation of the monastery which could not grow wider so funally a conssecutive storeyed construction was the solution to the problem. Going up the first staircase, we meet the very small chapel of St. Antonios and the crypt where, in the past, were kept the codices and heirlooms of the monastery. This chapel is of great importance because on its walls there are preserved few remainings of old paintings, dated back to the 14th century.